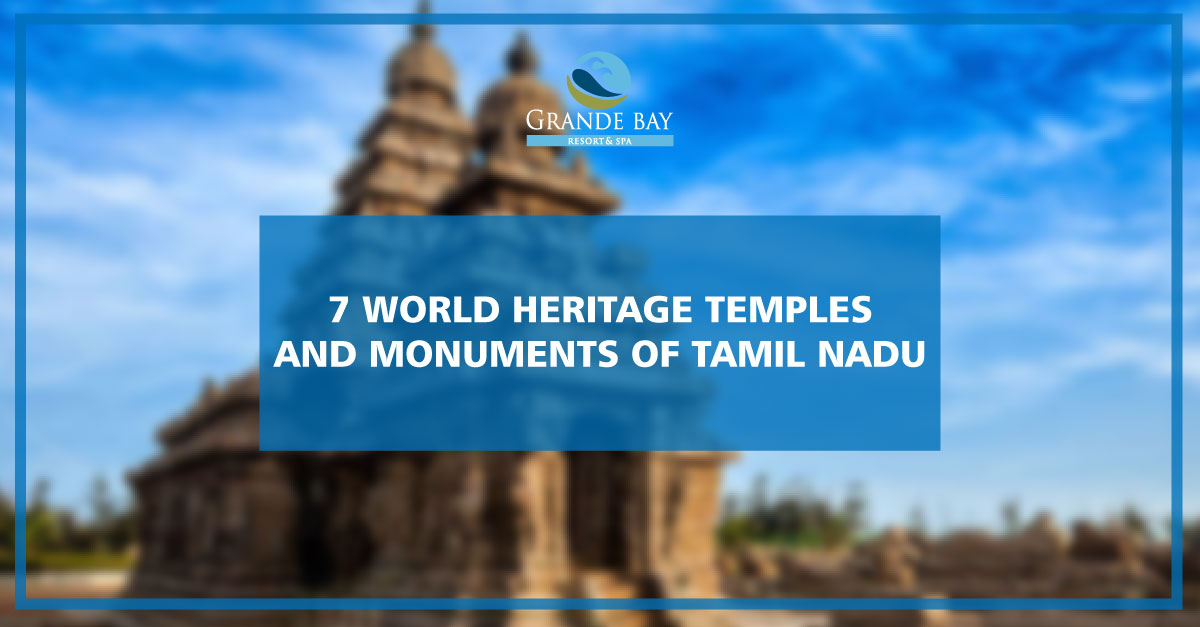 Every day, people around the world celebrate their culture and heritage by living their lives in ways that exemplify where they come from and how things are done in their part of the world. But once a year, we set aside one day to celebrate the shared history and heritage of humankind. This one day has been appointed as World Heritage Day and is celebrated every April 18.

World over, we have hundreds of heritage sites waiting to be explored. This year, let us a take look at the places closer to home and talk about some world heritage temples in Tamil Nadu.

The reign of the Cholas lasted from 9th to 13th century, and in that period, they built immaculate and grandiose temples.  The three most prominent and stunning of these are the Brihadeeswarar Temple at Thanjavur, the GangaikondaCholapuram Temple and the Airavatesvara Temple at Darasuram. With every wall having a story to say, this world heritage site is an all-time favourite for families and friends who love spending the day taking a walk down history.

The Brihadeeswarar Temple or the “Big Temple” perfectly characterises the exemplary skills of Chola architecture. This is the world’s first granite temple and one of Tamil Nadu’s most prominent tourist spots. It is located in Thanjavur and is made up of 130,000 tons of granite, with 400 pillars. This monument teaches us a lot about Indian culture and heritage and is a great day trip for inquisitive little kids.

Dedicated to Lord Shiva, the Airavatesvara Temple can be found in Darasuram, a small town about eight kilometres away from Kumbakonam. It was declared a UNESCO World Heritage Site in 2004. The Airavatesvara Temple is a masterpiece of art and architecture. The temple’s vimana is 85 feet high, and the mandapam in the front of the temple is a spectacular form of horses drawing a huge chariot. The temple is also filled with exquisite stone carvings.Head out to this exquisite site for a day of fun and learning!

The GangaikondaCholapuram Temple marks a crucial period in South India history as it was built to commemorateRajendraChola’s defeat of the Ganga Dynasty at the beginning of the 11th century. It is similar in style to the original Brihadeeswarar Temple inThanjavur, but smaller in size. The temple has a fantastic fresco design and is one of the famous temples in Tamil Nadu. The iconic Linga statue situated right in front of the temple is the biggest in the country at a whopping height of 13.5 feet – perfect for vibrant selfies and a breath-taking backdrop for those memorable family photos!

Group of Monuments at Mahabalipuram

Mahabalipuram or Mamallapuram is one of the most beautiful tourist and historical places in Tamil Nadu. It was the port city of the Pallava Dynasty in the 7th century, and the town’s archaeological remains stand as perfect representations of Dravidian architecture. Mahabalipuram as a whole is considered a UNESCO World Heritage Site since 1984, owing to the number of temples and structures that represent Tamil Nadu heritage and culture. Here are some of the most prominent ones.

The Shore Temple of Mahabalipuram is one of Tamil Nadu’s oldest temples. It is also called “Seven Pagodas” due to its pyramidal structure. This iconic temple consists of shrines to Lords Shiva and Vishnu, with two towers above. Rows of Nandi statues frame the temple’s courtyard, and on the temple’s south side you can see a boulder-carved Goddess Durga seated on her lion. Since the temple is located near the beach, you can club your visit with a spectacular sunset by the shore and make memories!

The Varaha Temple is a prime example of Pallava art and architecture. The temple is completely cut out form a single rock and its primitive style reflects early Dravidian architecture combined with elements of Buddhist design. It consists of a small shrine with a mandapam at the entrance. It leads into a beautiful verandah supported by two columns. At the base of these columns, you will find carved gatekeepers and horned lions – something interesting to add to your Instagram feed!

The Descent of the Ganges

The Descent of the Ganges or Arjuna’s Penance is one of Mahabalipuram’s most prominent structures and is an important world heritage temple in Tamil Nadu. This stunning open-air bas-relief is carved on a giant granite rock wall, and is believed to have been constructed during the reign of Pallava King MahendraVarman in the 7th century. The intricate sculptures carved in stone make us fall in love with the art of sculpting and is nothing less than a stunning masterpiece.

The final place on our list of world heritage sites in Tamil Nadu is the Nilgiri Mountain Railway. It is India’s only rack railway, and in 2005, it was given world heritage status by UNESCO. The NMR starts from Mettupalayam near Coimbatore, passes through Coonoor, Wellington, Lovedale and finally stops at Ooty. It is an exemplary work of engineering as the train travels through mountains and thick-forested areas. If you are an engineering buff, this heritage site should top your bucket list.

Since most of these monuments and heritage sites are situated in Mahabalipuram, make sure you head out to Grande Bay Resort for a spectacular stay. You can also partake in a number of fun activities the resort has to offer. Additionally, you cancheck out our blogs on tips to pack light for a vacation and the ultimate checklist for your next road trip for a memorable vacation! Find us on Google Plus

To anticipate our guests needs and deliver exceptional experiences, in order to create deep emotional connections and ensure that our guests leave with lifelong memories.